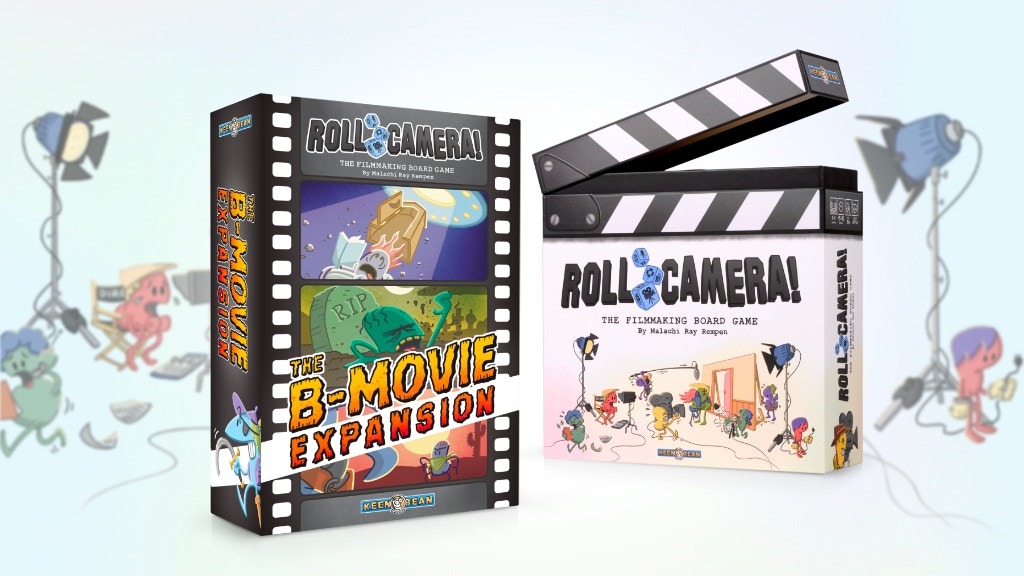 Thanks for your patience! As a reminder, if anything arrives damaged or missing, the replacement parts form is here.

Last week I shot and edited the how-to-play video for the B-Movie Expansion. Check it out!

I'm irrationally pleased with how the lighting turned out. It may not be consistent, but man that is some nice Spielbergian bloom :)

I also published an in-depth design diary for Roll Camera on BGG, which was quite fun to do. Give it a read!

Okay, first a disclaimer: I did not want to post about this here until everyone had received their games and expansions. I do think it's impolite to announce new things before you get your original thing. BUT this is probably the last campaign update before Essen Spiel next week, and I wanted to give a heads up if you are attending. So I hope I have your understanding!


With that said, the new thing is:

This is the first of hopefully many Story Packs, which are little micro-expansions featuring a handful of new material centered around a particular genre or subgenre. This one comes with 15 superhero scene cards, a new production company that requires using new CGI tokens, a new equipment card and some superhero themed scripts.

The idea with these story packs is to give you a one-off, isolated thematic Roll Camera game that also, if you choose, integrates into the main game and/or B-Movie Expansion. What's cool about this is that, going forward, I can keep supporting Roll Camera with new content that doesn't require as much intensive work and effort as B-Movie did. I can release one or two of these a year and keep the game fresh without reinventing the wheel. I'm excited for potential story packs like Silent Movie, Sitcom, Avant Garde...so many ways it could go. And I'm particularly excited about the idea of YOU helping me decide on the new ones!

This one will be available at Essen and afterward on my webstore, which I'm still setting up. Just wanted to let you know in case you are coming to Essen. We'll be at booth #5C100!

And when you get your game and/or expansion, I hope you get in touch with your ideas for the next Story Pack!

Okay that's it for now - as always, if you have questions, problems, ideas, greetings, complaints or movie recommendations, I am at your service at mal@keenbeanstudio.com, or on the Keen Bean Studio Discord.

If you don't have it already, you are very close to getting your Roll Camera and/or Expansion. As you get your game, please keep a couple things in mind:

Okay but where's my game?

Good question. Here's what I've got for ya:

Get in touch if you have any questions - a private message here on Kickstarter or email (mal@keenbeanstudio.com) usually works best.

Just a quick update on how shipping and freight is going:

Gotta love when you get a drama-free freight update these days, huh?

Thanks to those of you that stopped by the booth at GenCon - it is always SUCH a delight to meet you, and put faces to screen names. I'm grateful to have the best backers of any campaign ☺️

Addresses are locking on Monday!

That's Monday, July 25th for you. I meant to give you more heads up notice but I was oddly out of the loop on a couple freight emails and it turns out that most of the ships (and train for EU, and truck for Asia) with your games are already on their way! The only one we're waiting on is the UK ship, which is scheduled to depart on the 22nd. Delays can absolutely happen at the port of arrival, but I still think September is a safe bet for your game to be in your hands. But it's out of my hands now, so we're all waiting together.

BUT that does mean I need to get your address locked and delivered to the various fulfillment hubs ASAP. All addresses are locking this coming Monday the 25th. So if you're planning to move sometime in the next few months, now is a great time to retrieve your survey and update your mailing address!

But even if you have to move for some surprise reason or something, after the addresses are locked - just get in touch with me directly, and we'll work something out. At that point I have to do things manually but it's still possible.

If you came by our booth this past weekend and said hi - thanks! It was great to meet you. I always LOVE meeting people who play my games or read my comic - so much of my day to day is just me, my drawing tablet and my email inbox. It's fantastic to see faces, shake hands (or bump fists), take photos, etc.

Hope to see you at GenCon as well!

The PPC is here!

Thank you very very much for your patience these past weeks. I always want to keep you in the loop, and this time I didn't have much loop for you until the PPC (pre-production copy) arrived, so I wanted to wait for that. And then it got caught in German customs for way longer than necessary (they kept calling me, being like, WHAT IS THIS and I kept saying A BOARD GAME SAMPLE and they were like WHAT) - but it finally arrived, and it looks fantastic! Here's a little unboxing for ya:

So you might be sad now, thinking "oh PRE production copy, meaning production hasn't even started yet?? Dang it" well - cheer up! Because this isn't so much a pre-PRODUCTION copy as a pre-ASSEMBLY copy. I had already approved both digital proofs and the printed sheets of everything, so really there were no surprises here. The factory and I agreed that to catch up on delays following the Shanghai lockdowns we should start printing and only make changes if there were any major issues. Which - there are not.

So what's that mean?

It means production is 99% DONE!! As we speak they are cutting the final decks of cards and boxing it all up. We've already booked freight space on ships for the US, UK, and AUS hubs, and - get this - a TRAIN for the EU games. Yeah turns out shipping is so crazy right now that it's cheaper and faster to send the EU games from China to Germany by rail.

Now "booking" a ship doesn't mean that we have a schedule, strange as that may seem, it just means we have reserved space. My freight partner assures me that everything is still fully nuts out there right now so anything can happen, but estimates 8-9 weeks for US/UK boats. Unfortunately there are lots of delays happening at the ports right now so it's really hard to give anything more concrete than a best guess.

If I had to pick a time you can expect your game, I would say early September is a good bet. Which, hey! Still puts us ahead of my estimate when the campaign launched. I'm pretty thrilled about that.

If you're coming to the Berlin BrettspielCon I will be there! I can't NOT be there, living in Berlin as I do. I'll be at booth 3-C-12. Come say hi!

If you're coming to GenCon, I will be there as well, but not with a Keen Bean Studio booth - I'll be at the booth of my US partner, Grand Gamers Guild (#2310). Also come say hi!


Can I pick up my game / expansion at either of these conventions?

In theory, yes. I have air freighted a small number of games from China for both of these conventions, so if you absolutely must have your game / expansion, I will give it to you IF you contact me (mal@keenbeanstudio.com) beforehand and get written confirmation from me. That's so I can check that you backed it and that you won't get sent a duplicate later.

BUT: if you can wait to get your game delivered via normal fulfillment, I would ask that you please do. The air freight cost me an arm and a leg, so any sales I make are already marginal at best - I'm mostly doing it because as a small publisher I need to have a presence at these shows. If you pick up your game that's an additional sale I can't make. But like I said I won't stand between you and your copy if you really want it as soon as possible - as long as we confirm it beforehand.

At the end of May I did a livestream design diary for Roll Camera. It was great! We went through the game's design stages from conception through to final version, including all the pizza box prototypes and weirdo TTS design branches. It was a fun trip through the archives, and I was joined by my brother Erik who was there every step of the way.

You can watch it here:

We are getting very close now to you getting your copy of Roll Camera and/or the B-Movie Expansion! I'm so excited for you to get it. It's such a thrill getting that first PPC, the first time the whole thing is all together as one product after SO much time and effort. The production quality could not be better on this thing - I'm so happy. I hope you love playing it as much as I've loved making it!

I'll keep you updated when I have more freight information, and probably won't post another update until then. In the meantime if you need anything I'm most easily reachable at the friendly Keen Bean Studio Discord, or here on Kickstarter's comments or messages. I read them all.